After near-death experience, she wasn’t sure she would play tennis again

Home / Back Pain / After near-death experience, she wasn’t sure she would play tennis again

After near-death experience, she wasn’t sure she would play tennis again 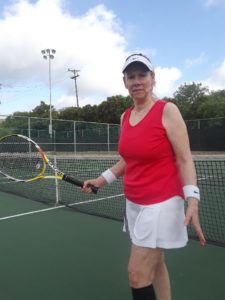 After having a pacemaker implanted, Cathy Miedema wasn’t sure she would ever play tennis again. Then she sought out the physical therapy services of the Non-Surgical Center of Texas.

Cathy Miedema was living a very active life, going to the gym and playing tennis when a case of the shingles sidelined her in 2018, and led to a near-death experience.

She developed pain in her lower back that cascaded down her left leg all the way to her toes. “I could hardly walk, and I kept fainting,” said Cathy, who turned 70 in March 2019. “I was absolutely so sick. My doctor told me I should go to the emergency room.”

In the hospital, her heart stopped. Staff resuscitated her and the next day, the San Francisco native was in surgery to have a pacemaker implanted.

After that, Cathy still had issues with low-back pain and her leg. The amateur tennis player, who has played competitively since her-mid 40s, had seen Dr. Annette Zaharoff at the Non-Surgical Center of Texas over the years for various injuries. She quickly called on her again for help.

“I went to the hospital (for three days) in August. I didn’t get to see Dr. Z for more than a month because I was still highly contagious from the shingles,” Cathy said. “I was so lethargic. I couldn’t drive. I couldn’t do anything, and I’m not a sit-on-the-sofa-all-day kind of person.”

“When I saw Dr. Z I asked her, am I in the right place? Can you help me? And without hesitation, she said yes.”

Dr. Zaharoff determined Cathy had neuropathy, or nerve damage, that was causing her leg pain and a weak leg and foot. She also had an injured disc in her lower back and an injured shoulder that made it difficult to move her left arm. On top of all that, she was still recovering from the pacemaker surgery. Dr. Zaharoff scheduled Cathy to begin twice-weekly physical therapy.

“My husband drove me to the clinic because I couldn’t drive,” Cathy said. “I was so anxious, but the physical therapists were so good to me. They helped me with my anxiety and all the exercises. I had so many exercises to do, I didn’t think I could do it. But they were so patient and caring.”

Cathy, who lives in New Braunfels, went through PT for more than six months with the physical therapists at the Non-Surgical Center of Texas. “It was a very slow process, but when I started to see them every month, I could see I was getting a little better each time.”

“They told me, ‘We can’t hurry this up. But we’re going to make you stronger, do things you’ve never done before,’ ” Cathy said. “I put my life in their hands and they just went for it. They just got the job done.”

Exercises like the dying bug, bird dog and bridges to help strengthen her lower back, and various arm-strengthening exercises, helped her get stronger. “I’m on my way to becoming Superwoman,” she said with a laugh.

Through it all, Cathy wondered if she’d ever get back to playing tennis, a sport she loves dearly. Near the end of her physical therapy sessions earlier this year, she called her former tennis coach of 24 years, Larry Oxford, and scheduled a lesson. “I’m up to 45 minutes of doing all the stuff, everything but running. He’s preparing me. I’m in the process and I’m back on the court.”

Cathy continues to do her stretches and other exercises, and is hoping to get back into competitive tennis later this year. She may even return to her full-time job as a dietitian at rehabilitation centers.

“I’ve been a rehab dietitian for 30 years and I’ve never met anyone in my life who gets the job done like Dr. Z and the Non-Surgical Center of Texas,” she said. “She empowered me, the therapists empowered me, and they were really focused on getting the job done and doing it correctly.”