On The Radio: Dr. Z featured on “Ask The Experts” Radio Show

Home / Back Pain / On The Radio: Dr. Z featured on “Ask The Experts” Radio Show

On The Radio: Dr. Z featured on “Ask The Experts” Radio Show 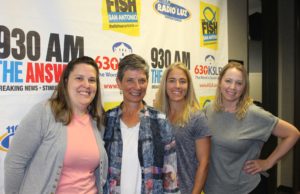 Dr. Annette Zaharoff, Founder and Medical Director of the Non-Surgical Center of Texas, appeared on the “Ask the Experts: South Texas Live” radio show on Saturday, July 13 on 930-AM “The Answer” station KLUP.

Dr. Zaharoff, speaking with audiologists Dr. Nicole Davis and Dr. Dawn Bledsoe, talked about her passion for non-surgical regenerative medicine, her role as a leader in teaching doctors from around the world about the best ways to effectively utilize one technique called Prolotherapy, and much more.

Here are some excerpts from the interview.

Dr. Zaharoff: I was an athlete in high school in college I focused in participating in tennis. I played at the University of Texas for the team and afterwards actually went on to play on the circuit, professional tennis.

So it’s really been my passion sport and I’ve always been interested in medicine and I have been able to actually combine the two where I’ve done the professional athlete thing but I’ve worked at all the grand slams as a physician for the women’s tour.

So it’s been a great experience to have both those perspectives.

The thing with tennis, you’d think professional tennis players would have a lot of injuries, like tennis elbow would be the most common, but technically it’s typically not because they know how to hit a tennis ball correctly so they don’t have incorrect biomechanics.

But the sport has become a year-long sport so people get over-use injuries or traumatic injuries on different surfaces they play and knees can be definitely a problem for them, especially females.

Dr. Davis: Do you need to pause in training to let your body repair?

Dr. Zaharoff: It depends on your competitive cycle – how much you’re competing you really need to incorporate active rest. And sometimes that’s not possible because there’s back-to-back tournaments, especially at a high level. There’s a lot of sponsorship pressure to be in tournaments and to have people show up to see our stars.

Dr. Davis: I actually had tennis elbow, and I don’t even play tennis.

Dr. Zaharoff: That actually is not that uncommon, because any type of repetitive upper body activity can cause that injury. It can be computer use, a new one is texting. In your profession it may be a lot of small instrumentation use. We see a lot of people in the dental field have that type of problem because they are using that instrumentation repeatedly.

Dr. Davis: How did your non-surgical approach come to fruition?

Dr. Zaharoff: My board certification is in physical medicine and rehabilitation. I did a fellowship in sports medicine, and my focus has always been, as an athlete, really not to have surgery. I found a residency that deals with orthopedic medicine, so we were treating musculoskeletal problems in the office non-surgically.

As I continued, most of my patients would get well, but there would be a percentage, say 10 percent, they just wouldn’t heal. And I couldn’t figure out why some people would heal from an injury and others didn’t.

Your body does naturally heal. That’s the natural response. And I was very fortunate probably 15 years ago now to get introduced to a field called Prolotherapy. That’s a regenerative injection that helps stimulate the body to heal. And it was a no-brainer.

If you’re body’s not healing from an injury and you have a modality to help stimulate that repair process, why wouldn’t you incorporate that into your practice?

Dr. Davis: How does Prolotherapy work?

Dr. Zaharoff: Basically there are a number of factors that can happen. One is that a body naturally inflames an area to help it heal. And dextrose, which is sugar, actually stimulates inflammation. If you’re body isn’t healing . . . it’s not getting the stimulus to really start that inflammatory process and bring in all the goodies, all the messengers that tell your body, hey, let’s heal — those growth factors that you need.

Dextrose can actually stimulate a healthy inflammation and start that stimulus again. That’s the natural way our body heals. And patients have become a lot savvier about that. They understand that cortisone or steroids that are suppressing inflammation, you may get a little bit of pain relief, but those types of injections actually damage tissue, and they inhibit the process that your body wants to go through naturally.

And even in the orthopedic fields, the surgical fields, people are now understanding that inflammation is a good thing. You may have some pain issues but you don’t want to stop the body’s natural healing process. That’s what these regenerative therapies are doing (promoting natural healing).

Dr. Zaharoff: You may have pain and inflammation can cause pain, and you take a steroid injection, and the next week you are in pain again. And steroids can actually damage that tissue they can make it weaker and make you more susceptible to get a re-injury or worsening of the injury.

So there’s a feel-good effect, which people like It’s an immediate, “I hurt, now I feel better,” but now I’m going back to see my doctor every three months and getting a steroid injection, and it’s really causing potentially more damage.

Dr. Bledsoe: So, if pain is the indicator to the body to rest and take a break, and you don’t have pain anymore, you’re going to go out do stuff your body isn’t ready for.

Dr. Zaharoff: You do want to pay attention to your body and so when you know things cause pain, you really want to look at what types of conditioning things you’re doing: What did it start with? Was it something in terms of equipment if you are playing in a sport? What is it that started it?

That’s what I like to look at. It’s really going to the source of the problem. We obviously want to help with the injury, but we need to take a look at those other lifestyle factors or other things that might be contributing.

Dr. Davis: The last time you were here you talked about some mission trips you were on for Prolotherapy, and I understand you’ve recently returned from some more mission trips.

Dr. Zaharoff: I belong to a Foundation called the Hackett Hemwall Patterson Foundation, which is the name of three doctors who actually started that Foundation for Prolotherapy training. And along those lines, regenerative medicine and the Foundation has really taken off.

We started an organization called the International Association for Regenerative Therapy, of which I am the current president. So what we’ve had the opportunity to do is to train doctors from all over the world. We have done that by holding academic or didactic sessions at the University of Wisconsin. But we have doctors who come from literally all over the world who come to train with us. And what that’s done is, it’s planted seeds in other parts of the world for doctors to want to know about this procedure. So there are doctors who have trained with us, they organize a curriculum or courses or conferences, and they ask our doctors to come train with them.

And that’s led to us going to places like Honduras, Guadalajara (Mexico), Seoul, Korea, and most recently I’ve been to Budapest and also Crete (Greece) to do the same thing and teach doctors, literally from all over the world, how to do these training techniques.

Dr. Davis: How long has Prolotherapy been around?

Dr. Zaharoff: Prolotherapy has been around at least 50 years, probably closer to 70 years. Back in the 1950s there is literature documenting the healing effect of dextrose for orthopedic injuries. Dr. Hackett, he was a general surgeon, he would do hernia repairs and they irrigate the wounds afterward with dextrose, and he found those people tended to heal more effectively. So he started to apply that to other things like tendons . . . and documented that you could increase the size and strength of tendons and ligaments with the use of dextrose.

So really through the 50s, the 60s, that type of treatment was going on. And really with the glamour of things like Platelet Rich Plasma Therapy, that gets the high-profile athletes and TV stars talking about it, those are the glamorous names.

But Prolotherapy, I call it the gateway drug. Dextrose is really the gateway drug to learn how to manage patients with pain and understand how they should heal. What you put in the syringe at the end of the day – it could be platelets, it could be stem cells – it’s really about understanding how to help patients heal.

Dr. Bledsoe: How long should you be in pain? Is there a point where you have to look at a stronger intervention?

Dr. Zaharoff: That’s a great question. If it’s the first time it’s a part of your body that’s been in pain, I tell patients within two weeks they should have noticeable improvement. And they should be able to start going back to things (activity and exercise) that they may have modified initially. If the pain goes on past eight weeks, that’s actually what we call a chronic condition. That means your body has gone through the natural, potential healing cycle and it’s not healing. Your body is still giving you signals that it needs something.

I tell patients to maybe self-treat two to four weeks. If there’s no noticeable improvement, then they really should seek help. Maybe they need a couple of weeks of some easy treatment, and they get on the right road, and their body heals. But typically what we find is that injuries, especially as we get past our 30s and 40s, have already underlying degenerative problems. And although they may not hurt, when that tissue gets injured it does not heal the same as a young 20-year-old healthy tissue. It’s already had some damage and you’re kind of working against that.

I totally have recommended patients come in when they’re hurt. It might be to learn how to take care of an area, it might be conditioning, it might be flexibility strengthening, it might be your equipment, it may be your shoes, it may be what you’re doing at work – those things you can learn about and actually prevent that re-occurrence (of injury).

Also appearing on the radio show with Dr. Zaharoff was patient and fitness professional Julia Karlstad, who talked about how Dr. Zaharoff helped her to recover from chronic foot pain using a combination of PRP and Prolotherapy injections. Julia’s testimonial can be found at www.drzmd.com/medical/2019/06/19/fitness-instructor-back-on-her-feet/.