Amateur baseball player gets new life in knee thanks to Dr. Z

Amateur baseball player gets new life in knee thanks to Dr. Z 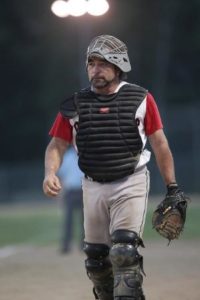 A lifetime of playing competitive baseball was catching up to Hector Toledo. The Venezuelan native had been playing since the age of 6, and also spent much of his youth competing in high-performance water-skiing tournaments, soccer and karate. “Everything that was bad for the knee, I did,” Toledo said with a laugh.

Now over the age of 50, the stress of completing a nine-game baseball tournament in a week was playing havoc on his knees, particularly since Toledo largely plays the joint-stressing position of catcher. He already had two surgeries on his arthritic right knee, including one that removed his anterior cruciate ligament (ACL) following an injury that included a complete tear of the ACL and a torn meniscus. The bones in his right knee create friction that results in serious swelling, particularly after playing competitive baseball.

“The swelling was making it really hard for me to compete and perform the way I wanted as an amateur baseball player,” said Toledo, a civil engineer who lives in San Antonio. “Plus my job has me doing inspections all the time, standing up all day, going up stairs.”

“Last Spring I said I needed to do something different. I had read a lot about regenerative medicine treatments like Stem Cell Injections, Platelets and Prolotherapy. That’s how I ended up in Dr. Z’s office.”

Dr. Zaharoff, who teaches doctors from around the world on the best practices for utilizing certain regenerative medicine treatments, proposed a physical therapy regimen to help strengthen the muscles and tendons around his right knee. Then, Toledo would undergo a combination of Platelet-Rich Plasma (PRP) Injections and Prolotherapy injections.

After four months of seeing the Non-Surgical Center of Texas physical therapy staff, Toledo was ready to undergo more than a dozen injections in one session. “She put the Prolotherapy injections on the tendons and the ligaments to help them repair and make them stronger. Then the PRP is what she put into the knee joint itself, helping it to regenerate.”
“My right knee is the best knee I’ve had in the last 10 years,” Toledo said. “I didn’t play baseball until the first week of November when I went down to Florida for my tournament. I played nine games in seven days. My knee barely swelled.”

“I’m convinced that Dr. Zaharoff helped me avoid a knee replacement surgery. I’m feeling great. I would recommend her to anyone who needs help with joint pain.”