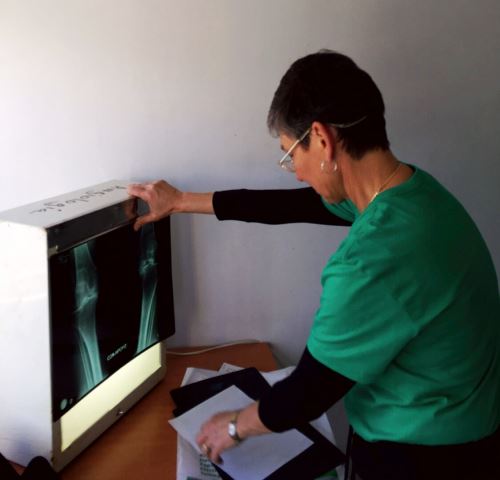 SAN ANTONIO, TX – Dr. Annette Zaharoff traveled to Mexico last month where the medical team she worked with performed more than 1,200 prolotherapy treatments. She served as a leader of the volunteer mission for indigent patients, which also provides physician training in the use of prolotherapy.

Dr. Zaharoff served as co-clinical director for the Mexico mission organized by the non-profit Hackett Hemwall Patterson Foundation (HHPF). A major focus of the HHPF is to train physicians from across the globe in the latest in prolotherapy techniques, an injection therapy treatment that uses dextrose to help heal injuries and reduce pain. Dr. Zaharoff serves on the board of the Madison, Wisc.-based foundation.

From January 11-15, Dr. Zaharoff joined nearly 100 other volunteers — including more than 20 physicians from Italy, Turkey, Canada and the United States — in treating more than 600  patients in Guadalajara, Mexico.

During the day, the doctors treated many different orthopedic problems such as shoulder pain, neck and low back pain and knee and hip pain. In the evenings, after clinic, the physicians held didactic sessions and hands-on labs to further their learning about prolotherapy techniques.

Patients travelled from all parts of Mexico and South America came to be treated for their orthopedic pain problems. “The patients were very grateful to be treated and there were many handshakes and hugs between doctors and patients; it was incredibly rewarding,” Dr. Zaharoff said.

This is the fourth trip Dr. Zaharoff has made to Mexico with the Hackett Hemwall Patterson Foundation. She is preparing for a March mission trip to Honduras — her ninth to that Central American country.

Dr. Zaharoff is also helping to develop a standardized curriculum with the Foundation that may serve as a global model for prolotherapy training.